Season Review
Tony Gormley started his second season as manager of Coleshill and brought in Dave Morby as his Assistant. But after 13 league games, just two wins and an early exit from the Challenge Cup, Gormley stepped down and Pete Wilson and Mick Beadle took over. Wilson stood down due to health reasons leaving Beadle in charge, an appointment that would last almost four years. The season was one long struggle with the goals of Craig Davies and a win over local rivals Castle Vale the pick of the very few highlights! Coleshill finished in 18th place, 4th from bottom but Beadle was popular and the introduction of young players from a very successful Youth team promised better times ahead. 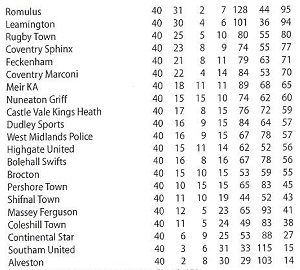 Player Of The Year: Kevin Wagstaff.

Users browsing this forum: No registered users and 0 guests